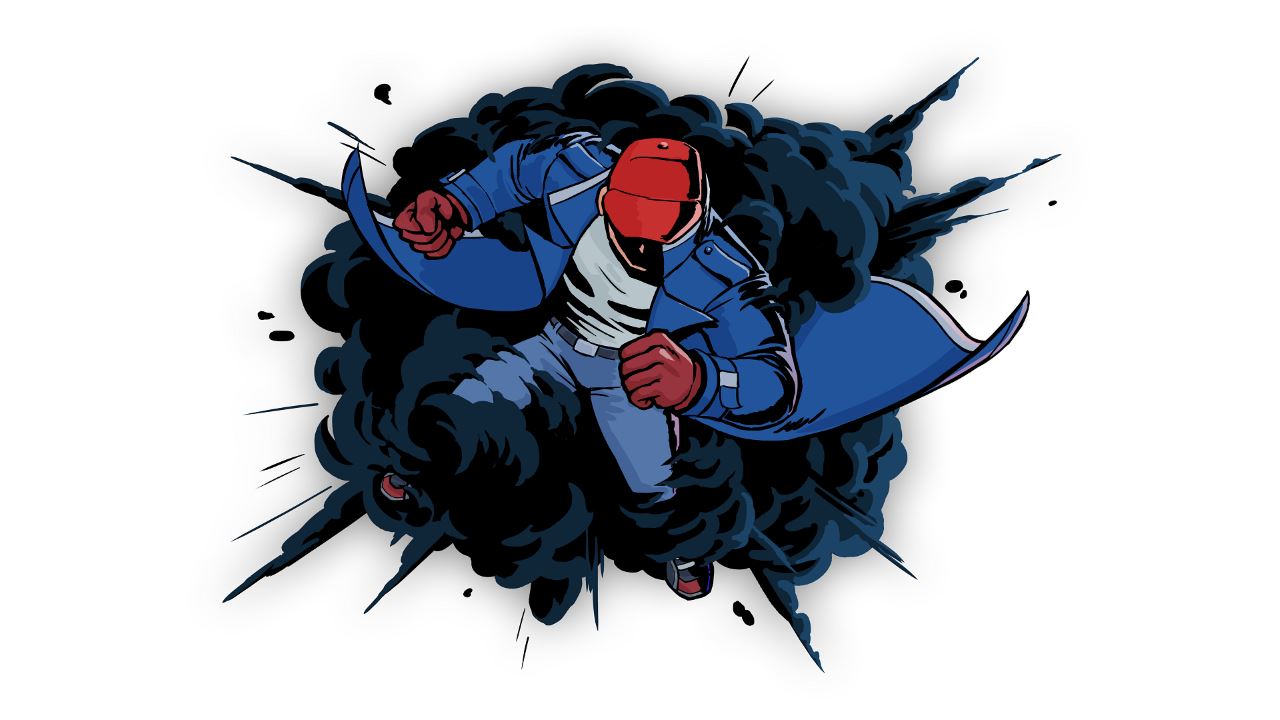 When Miami Hotline first launched in 2012, it has become a very successful concept with many titles get inspired by that. Unfortunately, most of them were not well received by players. One of these other ones is Mr. Shifty, a game from the developer who well-known by their Fruit Ninja and Jetpack Joyride on mobile.

Mr. Shifty is also the name of the protagonist, its gameplay focuses on quick action and teleports in short distances. You have to enter security building with a thousand armed guards, robbing dangerous nuclear cores from the crime syndicate. There is one problem: you have no weapon but teleport and fist your only friends here. With the top-down view, you can observe everything on the screen, especially bullet hell from those enemies in all directions.

However, this perspective often makes it difficult to distinguish between corpses and living enemies. I let Mr. Shifty die a lot because of this. Poor him. While Mr. Shifty has the ability to teleport in short distances, the fist is his only weapon, which means teleport is the main mechanism in your experience. 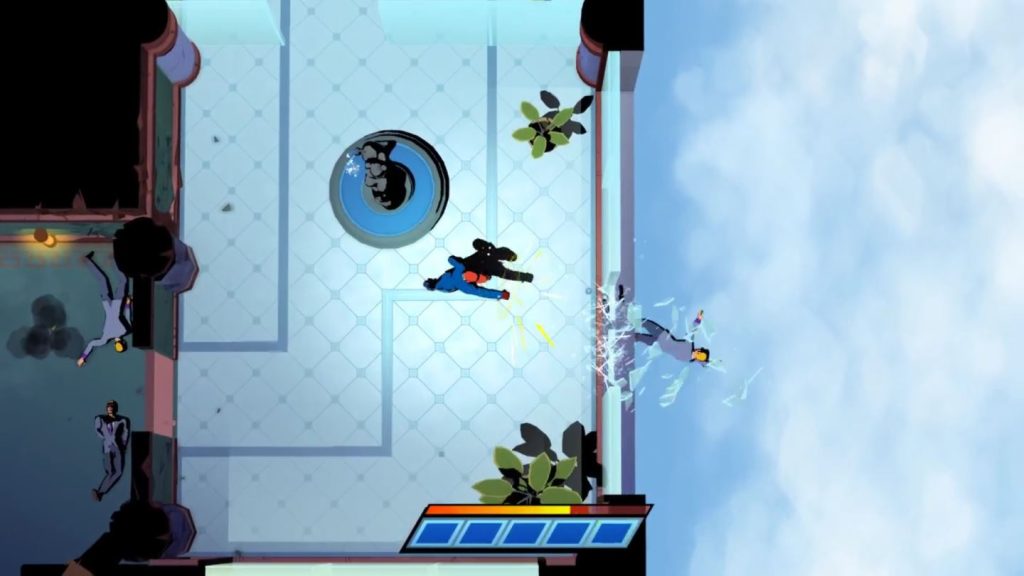 With beat ’em up gameplay, Mr. Shifty is a hard game in my opinion. The game has 18 levels, each one divided into many scenes. Most often force you to fight with a lot of enemies to go to the new scene. At first, only a few kinds of enemies, but later on they all heavily armed. From machine gun to grenade launcher and rocket launcher, they easily knock you down in the blink.

To add more trouble, Mr. Shifty is very vulnerable. If you let him receive a punch or bullet from the enemy, death is on the next gray screen. There is one character in which I don’t like is Nyx, an NPC who gives your direction and guidance for Mr. Shifty. She often makes jokes but it’s not fun at all and feels annoying most of the time.

The levels in other hand are well design and reasonable, with many rooms and alternating corridors, giving you a place to hide from the enemy’s bullets. It’s worth to mention that they don’t shoot you one by one but go by groups, find you everywhere and shot until you down. To make thing worse, they never run out of ammunition. No matter where you move, they will eventually find you and give you all they got. Even standstill there more than a few seconds will bring to your death as a result. It’s brutal.

However, Mr. Shifty can pick up items throughout the game to fight enemies and it made me laugh a lot. For example, you can take mops to beat the enemy and it’s really effective! Even funnier, you can nab keyboard in any room to throw at them. It sounds interesting, but most of those handy weapon has to be discarded after a few uses and fist is your only friend again. There are a few things like shield and lightning rod can be reused as many times as you want, but you cannot bring them to another level. My complaint is why I can’t pick up and use enemy’s gun and fire them back? Why?

Mr. Shifty is really hard, there is no denying. In the initial stages, although it’s mainly for guidance and still causes you to die from a few to dozen times. Each screen usually only takes about ten minutes to half an hour. Later on, the more difficult the stage, the longer the scene. Not to mention, the enemy is more aggressive and some level seems impossible with countless time to die. Worth mentioning, there are many scenes in which the game disable your teleport ability, make things a lot harder as if it’s not hard enough. 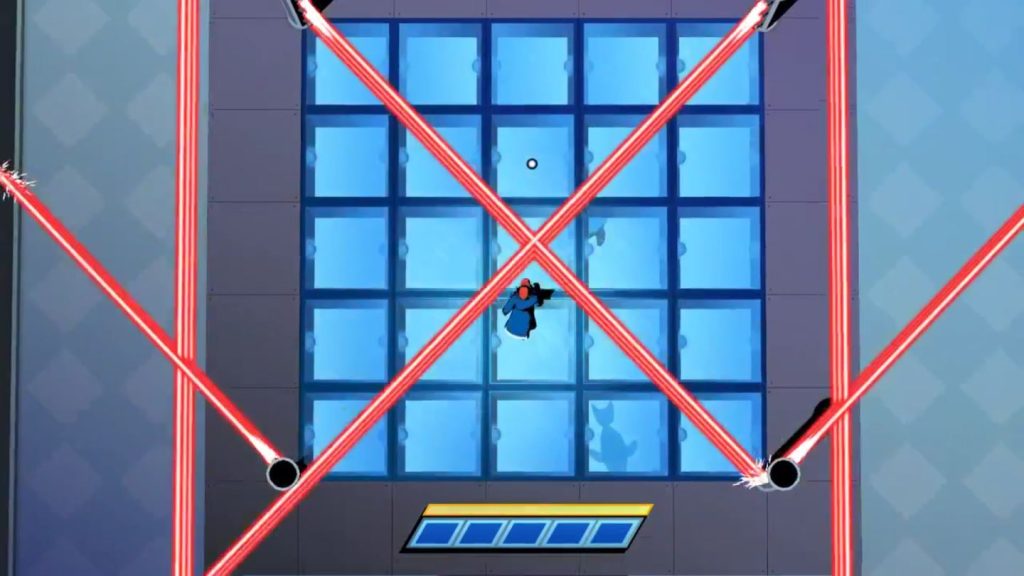 Losing the ability to teleport, you have no choice but to make use of the hidden places in the game, lure those enemies to accidentally kill each other. Usually, when facing major threats, most players tend to destroy the biggest threats first. But Mr. Shifty encourages you to take full advantage of such situations for your own advantage. There is a lot of enemies who fire the rocket launcher, but instead of killing them first, you should lure other enemies to get hit by their ally, it’s easier that way.

While it’s fast-paced gameplay is a a lot of fun, its graphics is just average. Characters are designed in a comic style, it’s cool but not inspired. It’s the same for the music too, it brings a retro feel but does not create a strong emotion to fit those intense actions of the game. More than that, not everyone likes those tone, especially younger gamers.

In conclusion, Mr. Shifty is still a good game with great gameplay. Despite the short experience, the game is packed with 18 levels and require a lot of focus and fast response. This is not a casual game that you can have an easy play, it requires a high level of skill and good reaction to beat. If you like fast-paced and beat ’em up games, then Mr. Shifty is a good one to consider.

Mr. Shifty is available on PC, PlayStation 4, Xbox One and Nintendo Switch.